Documentary photographer Ada Trillo captures the incredible journey that Central American migrants took in 2018 and 2020, to escape violence and poor economic conditions for the hope of safety, security, and possibility.

In October 2018, I joined a caravan of over 4,000 migrants from Honduras, Guatemala, and El Salvador as they made their way to the US-Mexico border. Two years later, I joined another caravan organized by community leaders in San Pedro Sula, Honduras.

For migrants who are too poor to pay a smuggler to get them across the border, a caravan becomes the only viable option that can provide at least a basic level of safety during their journey. As the caravans made their way through neighboring countries, they rapidly grew in size as more and more people, fed up with their living circumstances, decided to join them.

Their hope was that strength in numbers would protect them and possibly even persuade the US to open its doors. The opposite happened. Donald Trump declared a national emergency and sent troops to the US-Mexico border. Trump also threatened to cut humanitarian aid to Central America.

When I arrived in Tapachula, Mexico, I photographed parents, students, and children, including disabled people, who had left their home countries to save their lives. Many were fleeing extortion and death threats from gangs. All possessed the simple wish to live free of fear. A clever young woman from Honduras, who goes by the name Fer, disguised herself in men's clothing to avoid being raped. Along their journey, many people throughout Mexico showed compassion and solidarity with the caravan by giving food, shelter, and fresh clothes to those making the journey.
​
While my photographs document the plight and resilience of refugees and migrants, I hope that my work goes further than educating or raising awareness to compelling others to take action in their community. It is necessary to expose the truth about migrants and the injustices they suffer. 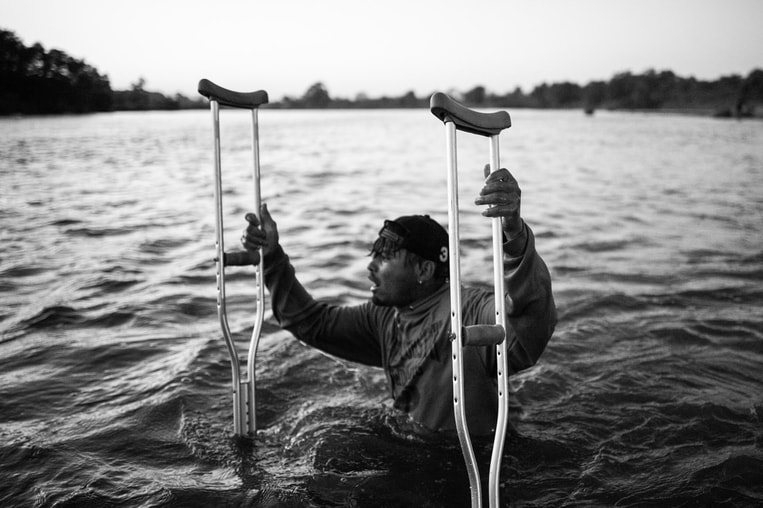 Joel Crosses the Suchiate, Guatemala-Mexico Border, 2018.
The migrant caravan successfully crossed the Suchiate River from Guatemala to Mexico. Having traveled across two countries in eight days, Joel, a Honduran migrant with one leg, made his way across the river with crutches, trying to keep up with the caravan. 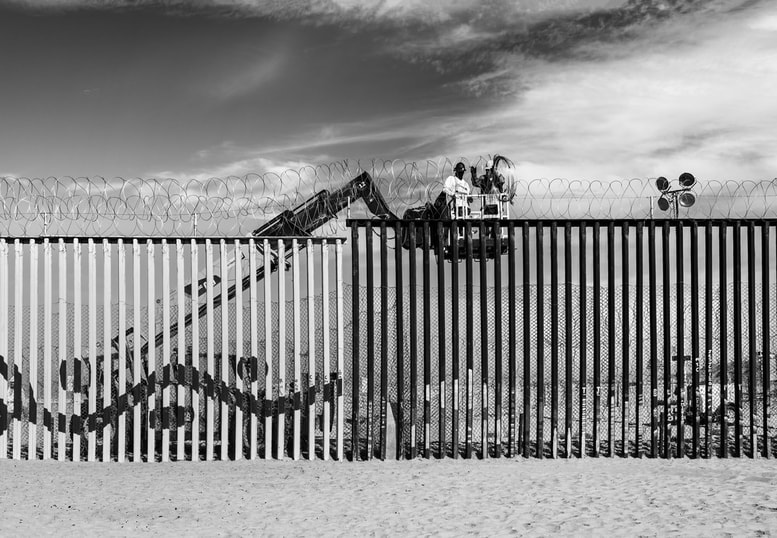 In January 2020, fleeing violence and poor economic conditions, Hondurans organized a massive migrant caravan that traveled through Guatemala toward Mexico. After traveling for eight days, the caravan crossed the Suchiate River and attempted to enter Mexico. They were met by the recently established Guardia Nacional composed of former federal police and military and naval forces.

Migrants attempting to enter Mexico split into two major groups. The larger group crossed the Suchiate River and was teargassed by the Guardia Nacional. Forced to retreat, they waited by the river's edge for two days. Their second attempt to cross the river at 4:00 in the morning was a success, but hours later the Guardia Nacional surrounded them, put them on buses, and sent them back to Honduras.

The smaller group amassed in the border town of El Ceibo in Guatemala and was met by the head of foreign relations in Mexico. He welcomed migrants in groups of 10 to enter Mexico and seek asylum. Migrants were briefly kept in detention centers, and despite promises to the contrary by the head of foreign relations, they were deported back to Honduras without being given the opportunity to seek asylum.

Trump effectively barred asylum seekers from entering the US by threatening to impose tariffs and cut foreign aid to Central American countries. Trump’s political agenda denied people their fundamental human rights. For many asylum seekers, deportation results in a life of extortion and impoverishment, or even death. The full effect of Trump’s xenophobic policies toward immigrants and asylum seekers will no doubt be felt for generations to come.

In 2020, the political landscape of migration was shaped by the cruel politics of the Trump administration. With a new US president in office, asylum seekers have begun to cross this landscape again. What happens under a Biden administration remains to be seen—but one thing remains the same: the unforgiving land they must cross, one step at a time. 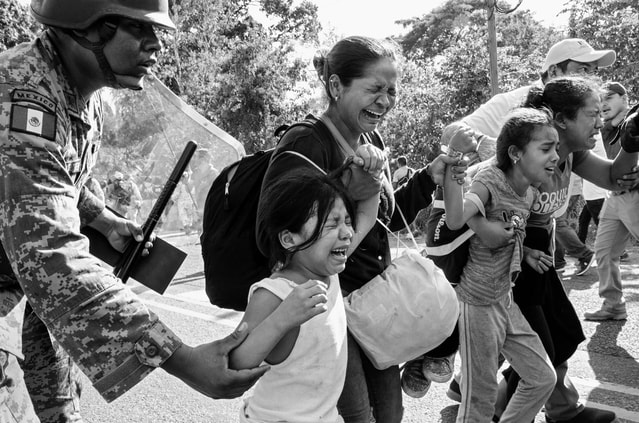 Teargassed, Ciudad Hidalgo, Mexico, 2020.
Upon arriving at the Mexico-Guatemala border, roughly 800 migrants managed to cross onto Mexican soil and walk several miles to Frontera Hidalgo. It was here that hundreds of troops descended upon the caravan and forcibly herded them onto buses with the use of tear gas and riot shields. Children were caught in the chaos, suffering chemical burns and other serious injuries. ​​
​Migrants from Honduras cross the Suchiate River as they pass from Guatemala to Mexico. Two days before, the Mexican government had teargassed a group of 500 migrants who arrived at the border and attempted to wade across the river into Mexico. Despite that event, the caravan persisted. Out of desperation, they tried crossing the river again. This time they succeeded and pushed forward several miles into Mexico.