​​​Celebrating 100 years, the foundation of Goodwill Southern California was established in El Pueblo de Los Angeles in 1916 by Katherine B. Higgins, the first woman to establish a Goodwill. Higgins was a pivotal figure in providing social services in Los Angeles and developing the La Plaza United Methodist Church. Goodwill adopted the philosophy “Not Charity, but a Chance” furthering the original mission of Dr. Edgar J. Helms, who founded the national Goodwill organization in 1902. Higgins and the clergy of the Methodist Church opened the first store on the Plaza in 1918, offering discounted clothing and household goods. In conjunction with the Plaza Community Center, Goodwill provided employment and job training, welfare services and a health clinic to Latin Americans and other immigrants living and arriving in Los Angeles.
In May 1915 Katherine’s work began in the building on Bloom St. (less than a mile away from the Plaza) that was used as the first welfare center and medical clinic for the Plaza Community Center. To finance the clinic, in 1916, Katherine purchased 200 used coﬀee sacks and created the first Opportunity Bags. The bags were placed in the homes of anyone who wanted to donate items they did not need or want in order to give others the opportunity to buy them at nominal prices. 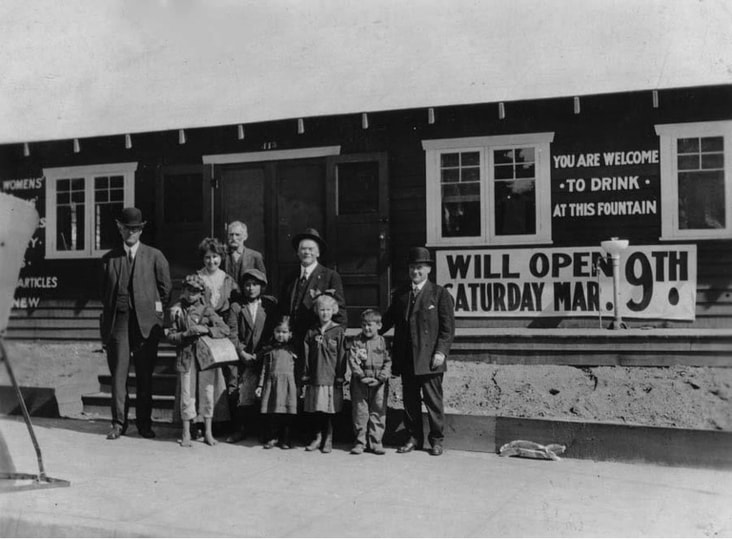 Katherine Higgins at the opening of the Plaza Community Center and Goodwill Center, 1918
On March 9, 1918 the first Goodwill Store opened in one of the portable buildings in the Plaza Community Center on Marchessault St., presently the southern end of Olvera Street on the Plaza. During a time when the City’s facilities were segregated the water fountain, in the background, was a symbol of “brotherhood” where anyone of any race could freely drink. ​​
​In 1927 the health clinic was moved from Bloom St. to the newly constructed building on the Plaza. When Goodwill opened in 1918 Katherine managed the Welfare Department that included the medical and dental clinic, while the Industrial Department was under the direction of Mr. S. M. Wellwood, who previously worked in San Francisco and on the staﬀ of Morgan Memorial in Boston.
In 1920 three more Goodwill Stores opened. The first opened in the Munger Block at 342 N. Main St. in Los Angeles; the second on Fair Oaks Ave. in Pasadena and the third at E. 7th St. in Los Angeles. In 1938 the present-day headquarters opened on San Fernando Rd. and in 1940 the largest store opened at 231-­‐235 S. Broadway St., both in Los Angeles.