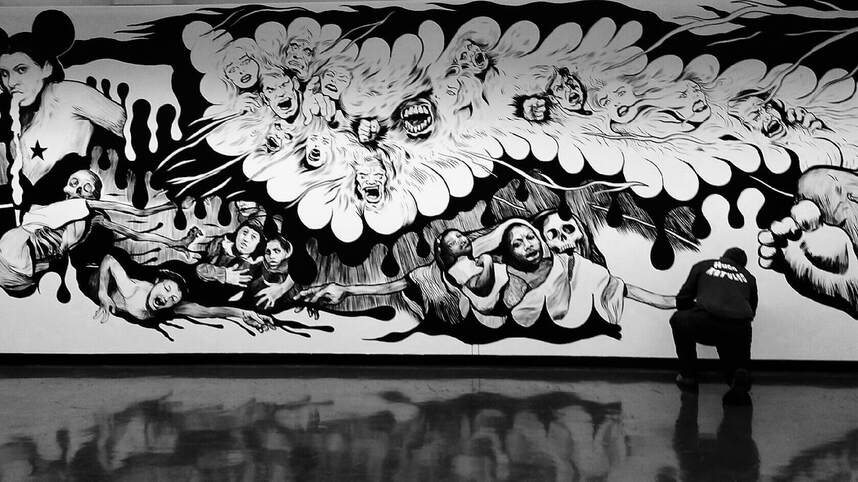 Throughout the month of September visitors watched artist Hugo Crosthwaite produce a new mural inside the Museum of Social Justice. The mural wrapped the gallery walls and was completed in a matter of weeks before the artist began to deconstruct it. In February, he slowly painted out the mural, bit by bit. This mural as a performance is part of a series he calls In Memoriam, which the artist has been painting across the US and abroad. Visitors were encouraged to speak with him, ask questions, or just watch him paint.

Crosthwaite works in a style which brings together portraiture of ordinary people, comic book characters, street signage, urban facades, and mythological references, among other things, into a dense and layered composition. His work reflects the character of frenetic urban settings, especially border towns like Tijuana where the artist lives. Fear, hope, sorrow, and celebration are all represented together as he incorporates his observations of daily life. He elevates the ordinary person to heroic showing the trials they endure in surviving and thriving in our contemporary cities. Through his work, Crosthwaite invites us to have compassion for people who struggle in the margins of society.

For In Memoriam: Los Angeles, Crosthwaite observed people in the local Los Angeles downtown area as he worked in an improvisational manner to complete the mural. Working only during the museum's open hours when visitors could observe, his interactions with the public influenced the mural. At the end of the exhibition, the artist produced an animation from still photographs taken throughout the process which shows the painting’s production from beginning to end.
​
This exhibition was co-presented with the California Historical Society, courtesy of Luis De Jesus Los Angeles.

Watch the complete creation of In Memoriam: Los Angeles and the beginning of its deconstruction.

"We are defined by the stories that we tell ourselves," says Crosthwaite, "either real or imagined, to deal with difficult situations in our lives. The story of Berenice, as I interviewed her, had elements of exaggeration, perhaps even fantasy, but it also speaks to universal truths about the disenfranchisement and vulnerability of immigrants and the violence that is prevalent against women in the U.S./Mexico border.  Rather than playing the role of journalist where I recount a factual event, I have left the video open to interpretation just as Berenice left me with her vague and unsettling story." 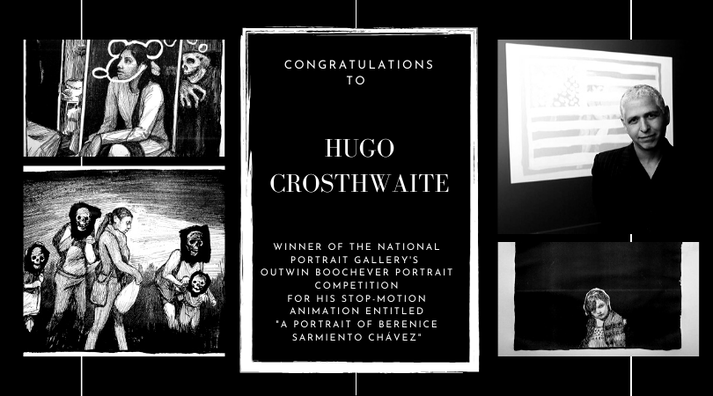 Set to the soundtrack of a dissonant guitar and a raspy voice singing in Spanish, this animated video reveals the dreams and experiences of a young woman from Tijuana who seeks to take part in the American Dream. Black ink, gray wash, and white paint—applied by the invisible hand of the artist— take turns to expose Berenice Sarmiento Chávez’s humble background and the threat of violence in her home country that pushed her to immigrate to the United States. The film suggests that the immigration journey is seeded with constant danger, especially for women and children.

This video is part of a series based on artist Hugo Crosthwaite’s interviews with people who are living in or are passing through Tijuana. The resultant improvised drawings represent the collective memories and oral histories from that part of the Mexico-U.S. border.