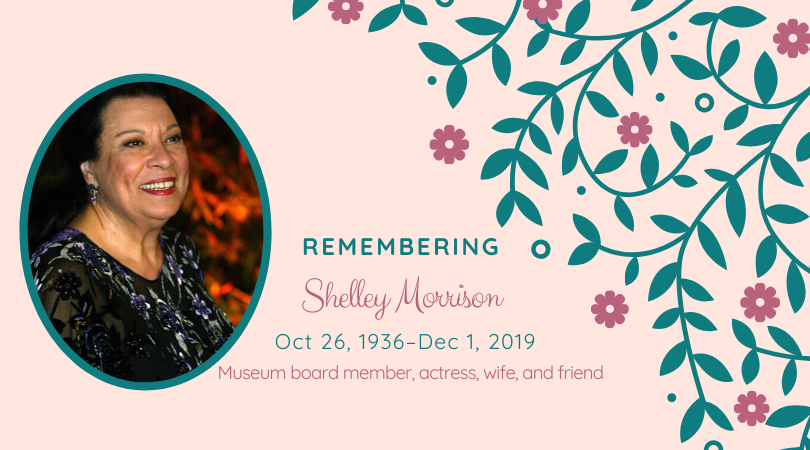 The directors of the Museum of Social Justice who served with our cherished former board member Shelley Morrison would like to send our sincere condolences to her husband of 46 years, Walter Dominguez, and their extended family. We all have so many warm, funny, and fond memories of our experiences with Shelley that there are too many to mention, but we would like to take the time to share a few of them with you.
Aida—Shelley was one of the most unselfish individuals I’ve had an opportunity to work with. I love how she demanded the attention of a council chamber. It was so much fun serving on the board of the Museum of Social Justice with her. It was never boring with her sense of humor.

Betty—I am so proud and happy to have known Shelley Morrison for over 15 years. She is a person whom one never forgets. She was part of our Museum of Social Justice who helped organize and fight for us at City Hall when we were losing our church. Shelley and Walter were among the first ones to join us and to begin organizing and preparing the future of the Museum in the Olvera Street community. They spoke to groups and special, important people about what our mission was. The Museum is still going strong, attracting thousands of people each year. She worked so hard with us, attending many events. Her warmth, kindness, and above all her friendship will always be remembered. WE LOVE YOU, SHELLEY.

Greg—The Shelley that I got to know was as a truth-teller and a fount of generosity—with an impatience towards injustice and willful ignorance. She had an opinion, and whether you agreed with her or not, her willingness to stake her claim on truth forced everyone else to have an internal dialogue on where they chose to stand. You could see in her eyes that she had a beautiful vision of the paradise we could all be a part of, if only we chose to act swiftly and with conviction—her frustration at society’s sluggish limp towards justice was obvious. And yet, she also had fun and enjoyed every moment of life. She could be self-deprecating and funny when things were not going according to plan: When she was about to perform for a private audience, she got locked in the water closet. She made everyone laugh as she announced her new show, “singing and performing from the toilet”—because the acoustics were amazing! She showed kindness and love to complete strangers—especially the homeless—and chose to be interested in them and engage with them as fellow children of God. Such generosity, even when she felt ill, was a great lesson about how you choose to live—the people you interact with will be your life’s legacy; not wealth, awards, or fame. Thanks for spending time with us, Shelley. You will always be loved and remembered.

Joe—Walter, your tribute for Shelley on Sunday was spot on. As a member of the board of the Museum of Social Justice, it was wonderful to see her life’s journey highlighted as she lived a life of social justice. Thank you both for your leadership and contribution to our board. You were there with us as we began to weave our tapestry as a new museum. We pride ourselves on telling stories through our exhibitions while always striving to produce a quality product. Thank you and God bless you, Walter.

Keith—I will never forget how nervous I was when I attended my first Museum of Social Justice board meeting as a potential member. It was my first time being considered to join the board of directors of any organization. Just a few minutes into the meeting, my nervousness disappeared. Shelley played a major role in making me feel at ease. It was nothing like I expected. This was not a board full of stuffed shirts, and the least stuffed shirt was Shelley. Although serious business was being conducted, Shelley created an air of playfulness and fun among her fellow board members that made me feel they were a group of people who wanted to do good work and have fun while doing it. I left that meeting thinking I could hang out with them and give something back to the community while having fun. I have been hanging for seven years and counting. Thanks, Shelley!!
Support Us