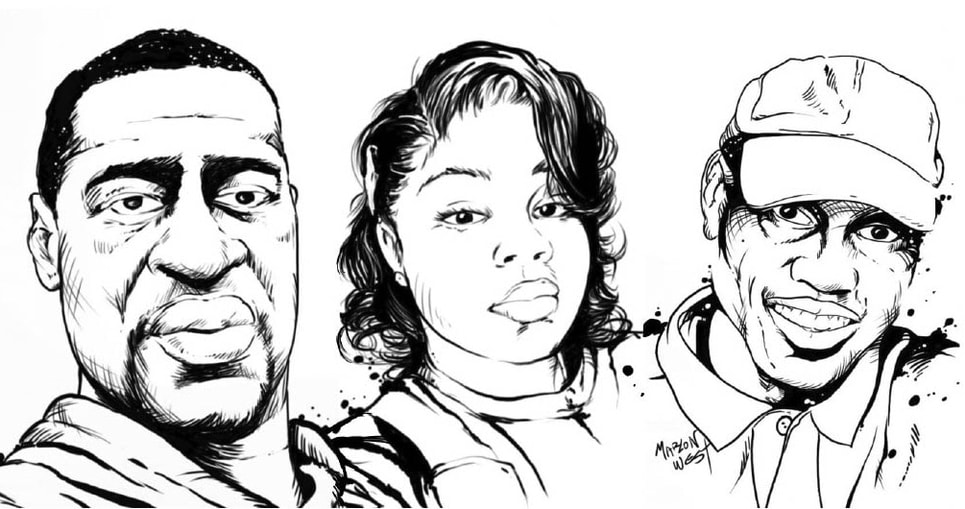 Marlon West of Disney Animation was content to make photo tableaus of action figures as a silly creative outlet between Zoom meetings and housework during Covid lockdown. That came to a crashing halt with the murder of George Floyd when he started these comic style tributes. He says, “For many of us Black nerds, Marvel's characters are particularly relatable. They are often hated and hunted by the powers that be. They are aliens, or born different, or having to deal with harsh cards dealt to them. They are feared, despised, shunned, and misunderstood. There isn't a more American form of portraiture than black "inks" over white, to honor those that faced this nation's fear and loathing of the Black body."

​There is a woman shot in bed, a woman shot peering from her own window investigating strange sounds, and a man shot on his own couch eating ice cream. Here's a runner chased and killed on the street, a child pulled from his bed and killed over a lie of whistling, another child crushed under guards for throwing a sandwich. There's a writer and birdwatcher threatened with police action and lied on, a Black officer who put himself in harm's way on January 6th, and a white officer murdered and his death still unsolved by the same white supremacist mob. There's a youngster with Skittles and a talented violinist that never made it home from the store. There are also defenders of civil and women's rights lost during 2020.
Support Us