These soldiers’ dedication to their country matches or surpasses the commitment of the native-born. Their honorable service, however, has been rewarded with dishonorable actions—denial of citizenship, unceremonious deportation, and hardships faced by the veterans and their families.

Since the passage of the Illegal Immigration Reform and Immigrant Responsibility Act in 1996, the United States has deported thousands of non-citizen military veterans. These veterans are generally childhood arrivals to the United States with legal permanent resident status, who have a criminal record.

This exhibition seeks to create a visual space in which some of these deported veterans not only recover their denied citizenship but also expose the damage inflicted on them by unjust government policies. From Mexico to the Dominican Republic to England to Costa Rica, veterans proudly display the objects that confirm their American citizenship. They want to remind us that their struggle to gain citizen status is a struggle for social justice. 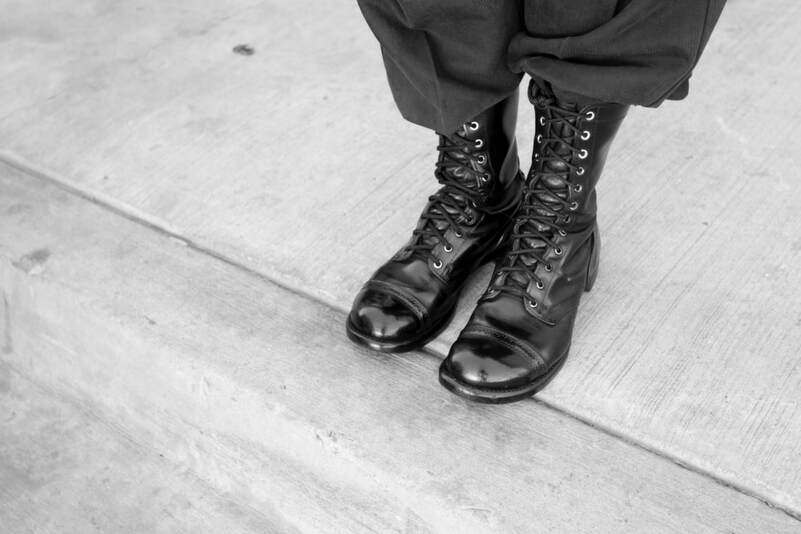 A deported US Army paratrooper with his Corcoran jump boots.
Tijuana, Mexico, 2016. 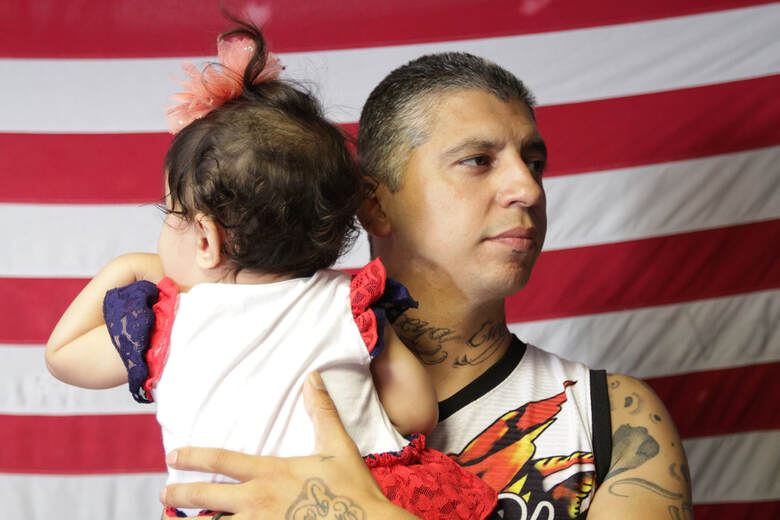 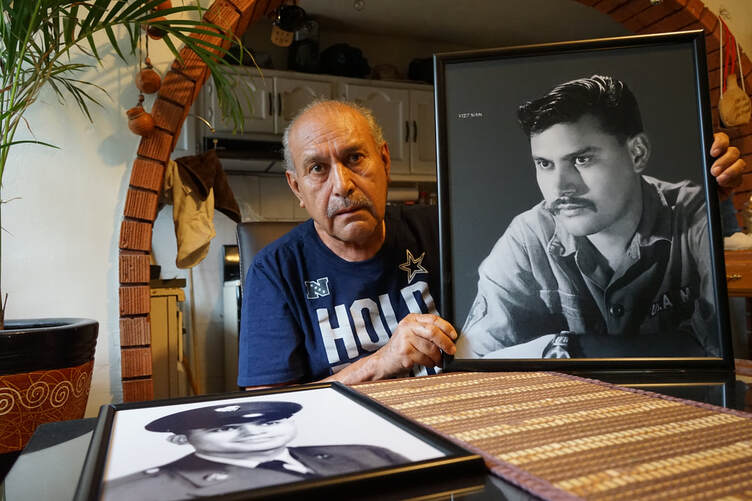 Panchito, a deported veteran raised in El Paso, Texas, drafted into the US Army during the Vietnam War, displays his boot camp and “in country” portraits.
Juarez, Mexico, 2019. 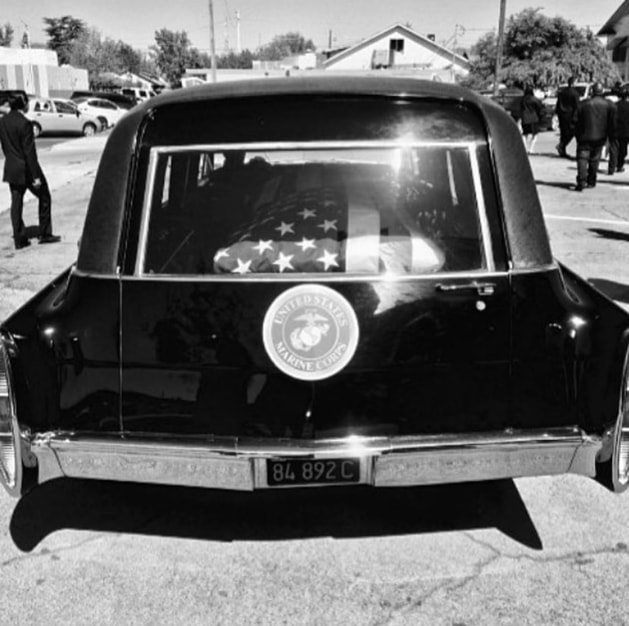 US Marine Corps veteran Enrique Salas’s flag-draped casket outside St. Anthony's Church. Salas, 47, had a truck accident in Tijuana, Mexico, where he was living following his deportation. Hi fellow veterans fought to get a humanitarian visa to take him to San Diego, where he died.
Reedley, California, April 2018. 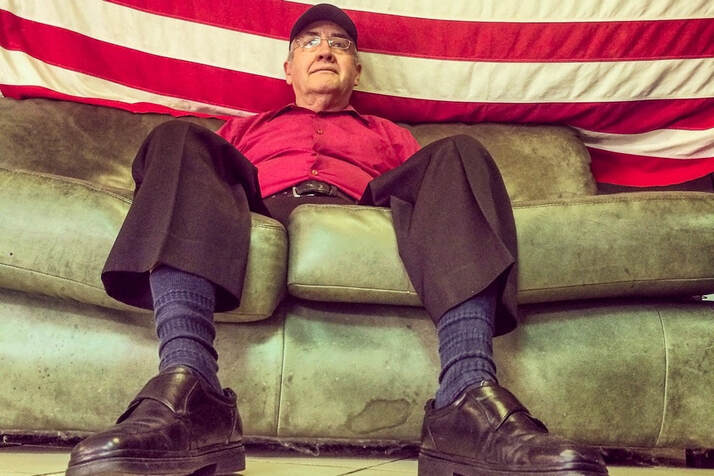 Joe, from Hollywood, California, and drafted into the US Army during the Vietnam War, on his first day of deportation.
Tijuana, Mexico, 2018. 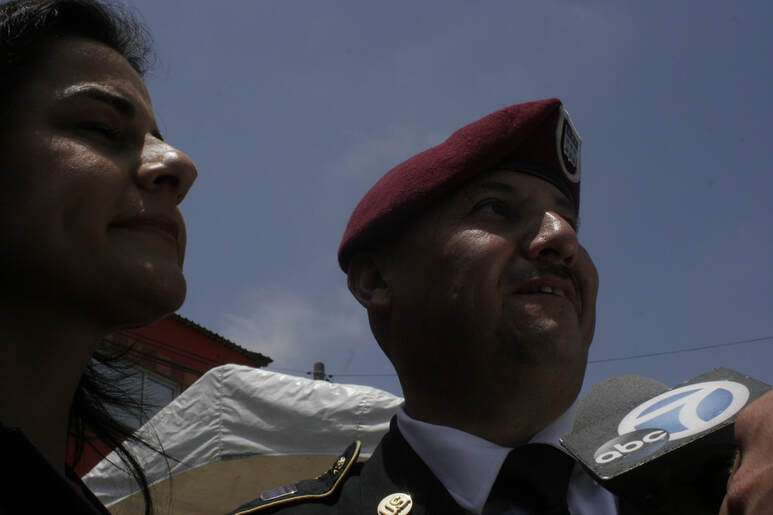 My name is Joseph Silva. I am a United States Navy veteran and a Documentary Fine Art photographer.

“You don’t leave your shipmate on the beach, leave no man behind.” -  the Soldier's Creed.

As of 2021, I have shot a couple hundred rolls of film and filled multiple hard drives. I personally invested 6 years of my life to raising awareness of the deportation of Veterans from the United States Military. I have traveled to the Caribbean, Central America, Europe, and North America documenting deported Veterans. I spent extended time with these Veterans and their families so that I might share their story.

My journey started in the spring of 2016 while photographing Donald Trump protesters in downtown San Diego. I started to hear stories about deported veterans, so I sent a message to Hector Barajas, a US Army veteran deported to Tijuana, Mexico. I told him I wanted to cross the border to hear his story. A couple days later I took a Leica M4, M3, and a checked-out Canon 7D from the Santa Monica College student newspaper. I met Hector at the BUNKER, the Deported Veterans Support House in Tijuana, Mexico. After arriving at the BUNKER and meeting Hector and fellow Veterans, I felt like I was at a VRC (veteran resource center) on a college campus shooting the shit: telling sea stories, talking about deployments, hitting the beach, Tam’s Burgers, Okinawa, watching action films, true crime documentaries and Breaking Bad marathons on TV. I knew within 20 minutes after being in their presence that I had to tell their stories.

A year later, spring of 2017, I accompanied my new friend Hector to Juarez, Mexico to meet more deported veterans and help open a BUNKER, a Deported Veteran Support House. It has been one meeting after another. In Juarez, I met a deported female Marine through my uber driver. I spent 30 minutes with her and before parting ways, she told me that her little brother was an Air Force Veteran who was deported. We had a conference call and exchanged numbers and then she vanished into the night.

You may not be aware, but there are hundreds of deported veterans who were drafted during the Vietnam War only to be deported.  There are even more deported Veterans from the many recent wars in Afghanistan and Iraq. It is unbelievable to think this could happen, but it has, and it continues. I believe anyone willing to volunteer for the United States military should automatically become a United States citizen, no discussion.

To stay current on the struggles of deported veterans follow these organizations.

Los Angeles is a big city, five hundred square miles of endless neighborhoods seemingly without a center. Fifty years ago, new in town, I struggled to grasp this gigantic place without much success. One night I was telling this to a friend when he gave me a thought I still hold on to. The heart of Los Angeles, he told me, is a little plaza near downtown called El Pueblo de Los Angeles. It dates back to the earliest settlers and everything else is newer and radiates out from it. “Go and stand in the plaza,” he said, “close your eyes and you can feel the city all around you.” So I went, and stood with closed eyes and the feeling slowly grew in
me that I was standing at the calm center of the city. There may have been drugs involved that night but for me ever since, Olvera Street and the plaza down at the end have been the heart of L.A. Sitting here still calms me and resets my senses.

The Museum of Social Justice is located on the edge of the plaza, in a small space down some stairs at the corner of a large building, the United Methodist Church. The museum calls attention to often overlooked issues and right now it is calling attention to the immigrants who served in the United States military, risked their lives to keep us safe, but then later run afoul of the law. Unprotected by citizenship they have been thrown out of the country they fought
to protect.

Joseph Silva is a U.S. Navy Veteran and a Documentary Fine Art Photographer. He spent six years exploring this story, traveling to Mexico, the Caribbean, Central America and Europe to photograph the veterans this country has turned away. The Soldier’s Creed: “You don’t leave your shipmate on the beach, leave no man behind” drove him to tell the story. In his personal statement about the work Silva says, “My journey started in the spring of 2016 while photographing Donald Trump protesters in downtown San Diego. I started to hear stories about deported veterans, so I sent a message to Hector Barajas, a US Army veteran
deported to Tijuana, Mexico. I told him I wanted to cross the border to hear his story. A couple days later I took a Leica M4, M3, and a checked-out Canon 7D from the Santa 2/3 Monica College student newspaper. I met Hector at the BUNKER, the Deported Veterans Support House in Tijuana, Mexico. After arriving at the BUNKER and meeting Hector and fellow Veterans, I felt like I was at a VRC (veteran resource center) on a college campus shooting the shit …. I knew within 20 minutes after being in their presence that I had to tell their stories.”

​Silva’s work fills hundreds of rolls of film and multiple hard drives and the pictures on display here attest to his vision and his passion. But the story he tells is a complex one, one that the photographs alone cannot reveal, so each picture is accompanied by a short text that gives you a name and a glimpse into the person pictured. The combination of words and pictures tells a sobering story. Moving slowly in the quiet room, seeing them and learning little bits
about these strangers, I found the pictures and text together illuminated their lives, and knowing their names brought them even closer.

For the record, this exhibit is not a simple one-dimensional story. Some of these soldiers have adapted to life in their new countries and would be happy just to come once in a while and visit friends and family left behind; others want the birthright they believe they have earned, but all feel that something is fundamentally wrong with the way they have been treated.
​
So once again, I found myself in the plaza at the  at the heart of Los Angeles. This time I gained an understanding of a story I hadn’t thought about and saw an exhibition worth seeing. If you have the chance I suggest you come down here too. You can spend some time looking at Joseph Silva’s fine photos and then you can stand in the plaza at the center of Los Angeles, feel yourself in the middle of it all, and think for yourself about what ought to be done.
Photography Exhibition Showcases the Lives of Deported U.S. Veterans
MERCEDES CANNON, CARMEN RAMOS CHANDLER, CSUN TODAY
FEB 28, 2022

Serving your country is viewed as an honorable path for many Americans. But military service is often not enough to be considered a citizen on paper.

The exhibition, titled “Deported Veterans: Photographs by Joseph Silva,” was organized by the Museum of Social Justice and the Tom & Ethel Bradley Center  and opened Thursday, Feb. 24, at the Museum of Social Justice, located at 115 Paseo de La Plaza, Los Angeles. It is the first of two shows featuring of Silva’s work on the subject of deported veterans. The second will be held later this year at CSUN in collaboration with the university’s DREAM and Veterans Resource centers.
“I invested six years of my life to raising awareness of the deportation of veterans from the United States military,” said Silva. “I spent extended time with these veterans and their families so that I might share their stories.”

SAN DIEGO, Calif. (NewsNation Now) — In the early hours of Valentine’s Day, Mauricio Hernandez-Mata crossed into the United States from Mexico at the San Ysidro Port of Entry in California, marking the Army veteran’s first return into the country since he was deported more than 10 years ago.
“I think I’m gonna wake up right now and I’m still gonna be in Mexico deported,” he said. “It’s unreal.”

Hernandez-Mata served in more than 100 combat missions for the U.S. Army and when he left the service, he expected to be granted U.S. citizenship. Instead, he was deported after being convicted of drug and firearm possession.
"Exiled is, in my opinion, a kind word for the feeling," he told NewsNation at the nation's busiest border crossing where tens of thousands of people enter the country each day.
Hernandez-Mata's attorney Andres Kwon, of the American Civil Liberties Union of Southern California, said immigration laws can be "unforgiving."
"They're extremely harsh," Kwon said. "Things that are misdemeanors can be deemed in immigration law as an aggravated felony."
It's not uncommon for veterans like Hernandez-Mata, who suffer from post-traumatic stress disorder, to take actions that result in deportation, despite their military status, Kwon said.
A U.S. Government Accountability Office report found that between the years of 2013 and 2018, U.S. Immigration and Customs Enforcement deported 92 of the 250 veterans to whom they issued a notice to appear (a document that begins deportation proceedings). Veteran Affairs benefits aren't fully accessible to veterans who live outside of the U.S.
According to the government report, the most common countries of origin for deported veterans are:  Hernandez-Mata is the first to admit he's made mistakes. But Monday, he said he was thankful to hug his mother in the country he served.
​
"If I had a second chance I would gladly do it all again – fight for my country in any conflict," Hernandez-Mata said. "I have always considered myself and I am an American."

The DHS-VA Military Members and Veterans Initiative (IMMVI) visited the Museum to view the exhibition on March 21, 2022. 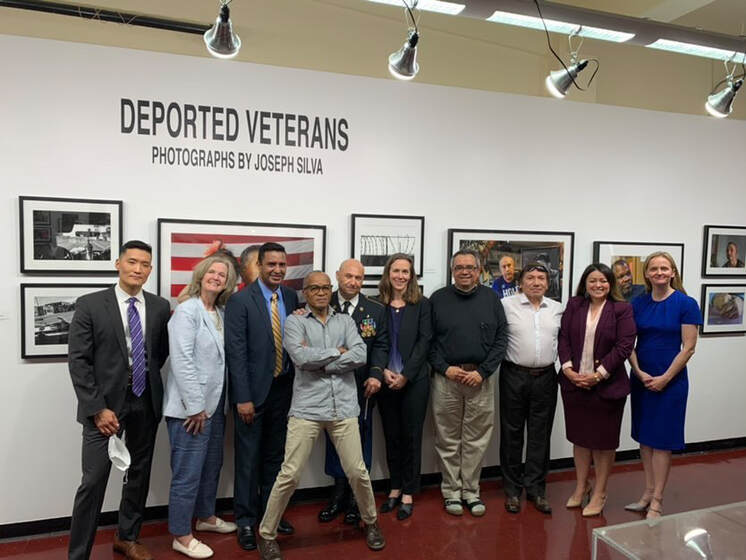 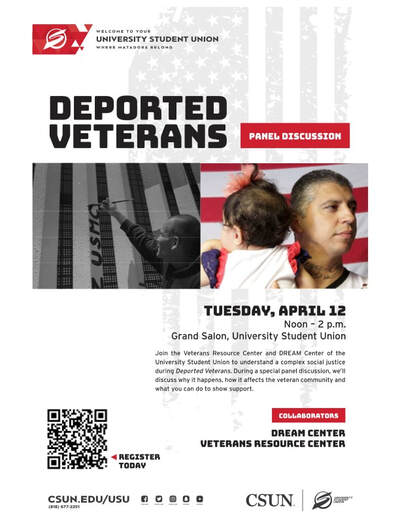